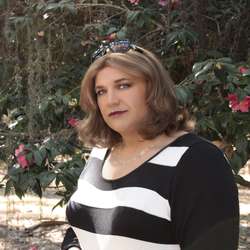 The Essentials
Last Seen: Nov. 13, 2022
Joined: Jul 27, 2022
Age: 48
Gender: T(M2F)
Location: Statesboro, GA, US
Relationship Status: Divorced
Interested In: T(M2F)
HIV Status: Negative
Height: 6 ft. 2 in. /187.96 cm.
Race/Ethnicity: White
About Me
Updated July28th, 2022
Men, I readily admit, I do not relate to men as you would seemingly want or hope that I might. Part of that is due to identifying as a lesbian, but also because I just do not think like you do. I may have lived as a man for most of my life, but it does not mean I understand you, relate to you, or talk about the things you would like to talk about; Friendships with men are difficult for me, and if I am neither sexually interested in men nor able to relate to them, then I see very little purpose in befriending them. So asking to be my friend on here will serve no purpose. So don't expect much attention from me.

I'm a 46-year-old trans-woman. I'm non-op (except for eventual Facial Feminization Surgery and breast augmentation. Divorced since 2012, single since 2018. I’ve been on HRT since 2015 and full-time since 2018) None of my pics are Faceapp, I have a couple of polished photos by the photographer, and often use a makeup artist for some shoots. I'm a lesbian, Mommy, Domme/ Dominant personality with a very small, almost imperceptible swing side. I am actively looking for a sincere, real, meaningful relationship with a trans woman/ CISFemale. I'm not too concerned about what the relationship "looks like" so long as it's meaningful and sincere. Open to poly relationships, open to swinging relationships, open to open relationships, and an "ethical slut"... seeking women/ trans-women/ CD's for potentially more. I'm not here for Any sort of cutesy roleplay, or cyber. What I'm seeking is something real, not any sort of game. I know I'm not every trans-girls cup of tea, the key is finding the one who sees me as her shot of tequila!!!

I am a sapiosexual and a demisexual. I'm here looking for authentic connections, the types of connections I desire, and always starting with friendship first; people who are willing to demonstrate effort and time to build at least a substantive friendship if nothing else. If one of your moves is calling me baby early on, and trying to create a sense of intimacy, that will not help you. Things like that need to develop organically, too much too soon is a turnoff. If you tend to lose interest, ghost people, or not hold up your part of the conversation, please keep moving. I won't chase you, I do not play those games, I beg for attention from no one.

Usage of words such as tranny, crossdresser, sissy, transvestite, Drag Queen, shemale, girly-boy(i), trap, ladyboy(i), slut, whore, or bitch...or any other such derivative words directed AT ME may result in my simply blocking you. They are so far from how I as an individual, identify; they would be completely inaccurate. Thank you for respecting the identity I've spent a lifetime creating. This does not mean that I am not supportive of anyone who does identify as such, however.

Other Social Media- NO men, please. Be prepared to reveal your ATC profile name here to validate you are not male.
Fetlife- KeepingCadence
KiK- Cave_diver_diwn

Education & Work
Education: College
Employer: I'm a History teacher
Philosophy
Religion: A woman of faith, but an issue with churches.
Political Views: A woman of political verve, but a severe distaste and distrust for ALL current politicians.
Favorite Quotes: You dont feel any existential dread?! Here, let's fill you right up!
Arts & Entertainment
Books: I'm a prolific reader, so all fiction and non-fiction on topics of interest or curiosity to me. I used to be a Harry Potter Fan, but when an author thinks it good practice to attack a part of her fanbase, I tend to take issue with that.
Movies: Star Wars, Star Trek, Ready Player one, Top Gun: Maverick, Jurassic Park series, and well shit tonnes more.
Television: Big Bang theory, That 70's show, Big Brother, Preacher, The Walking Dead, Stranger Things, For all Mankind, Star Trek, The Umbrella Academy, Upload, See, and soooo many more.
Music: 80's music, dance, techno, beach music, protest music, some 70's rock., all 80's metal and rock
Games: Simulators of all kinds, including Farming Simulator 2022, some first-person shooters currently playing Ready or Not.
Sports
Favortie Sports: College Football.
Favorite Teams: University of Georgia, Georgia Southern, Georgia Tech.
Activites & Interests
Activities: Activities I enjoy are scuba diving, kayaking, white water rafting, camping, NHRA, NASCAR, boating, Disney Parks Nerd, Disney movie nerd, mountain hiking, traveling, writing, video games (ask if you'd like to know which ones and if we might co-op), flight simulators, (ask if you'd like to co-op), movies of almost any sort, photography, shooting, cooking, family genealogy, history and collecting Revolutionary and civil war letters/ Love letters. Also Love Doctor Who, Star Trek, Star Wars... Oh, and if I giggle about something for longer than three seconds, I am NOT allowed to do whatever may happen next!